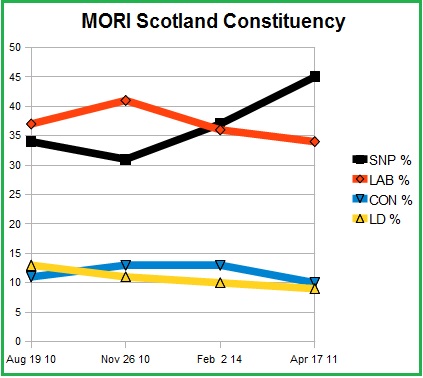 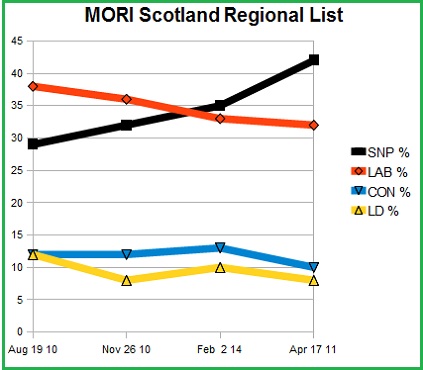 There’s been a lot of betting activity overnight with the publication of a new Ipsos-MORI Scotland poll that suggests that the SNP is heading for a big victory in the devolved parliament elections on May 5th.

In both parts of the survey – the constituency and the list – Ipsos-MORI found that the SNP have soared ahead opening up ten and eleven point gaps on Labour. As can be seen from the charts much of this since last summer has been at the expense of the coalition partners at Westminster.

The fieldwork for the poll took place BEFORE Scotland’s biggest newspaper, the Scottish Sun, gave its endorsement to the SNP.

At 2145 last night, as news of the poll started seeping out, I was amongst a number of PBers who got on the SNP at longer than evens with Betfair. That price has tightened sharply and the latest, as I write, is 0.7/1.

These were the poll shares with changes on February:-

The big caveat with all Scottish polling is that there’s a tendency to over-state the SNP. Even taking that into account it’s hard to see how Labour can catch up.

As I’ve been saying for weeks the real issue here is who Scottish electors want to be their First Minister – and even when the SNP were behind Alex Salmond had a big margin on this measure.

Scottish Labour’s strategy has been to ignore Salmond and to try to make this a vote on the coalition in Westminster. If the overnight polling is to be believed they are not being successful.